Linda and I want to thank you, our prayer team, and those following the Blog on our web site. www.itec.org for praying for us. We returned home safely and have enjoyed a wonderful Thanksgiving. I hope your Thanksgiving was a relaxing and a thankful time with family and friends.
For Linda and I, turkey with all the trimmings never tasted so good.  Rice is okay, but…..
I really thank all of you who prayed for my leg to heal.  It is doing okay according to the Dr. and I have learned a lot through the experience. Wounds in the tropics MUST be dealt with right away.  Not hours later when it is convenient.
Please continue to pray as we finish the design process, material pricing and completion of the proposals to each of the three missions we surveyed. The on-site survey is just the beginning of the process.  Actually, the hospital in Kamakwie will still need additional survey work to determine the extent of interior wiring that will need to be replaced.
All in all, it was a great trip. We were blessed to have the opportunity to meet many wonderful people. We will need many volunteers in the future as we try to meet the electrical needs in Lebanon and Sierra Leone so please keep watching our web site or call the office for details.  570-433-0777
Powering Missions Worldwide,
Tom and Linda Garber
Posted by Survey trip to Beirut & Sierra Leone at 9:01 AM No comments:

Last evening (11-23-10) Tom & Linda returned home from Africa as planned.  Tom is going to his family doctor today to have his leg checked.  He is doing better.  Thank you for praying for the Garber's!

Happy Thanksgiving from all of us here at I-TEC!
Posted by Survey trip to Beirut & Sierra Leone at 8:19 AM No comments: 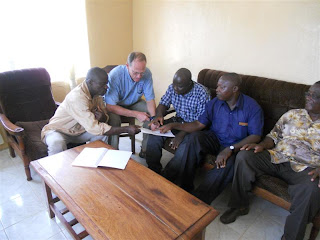 Today has been a pivotal point in our week long survey here in Panguma. We spent most of the day with representatives from the power co. and it was a VERY positive meeting. Having 3 engineers come this far to meet was a miracle in and of itself; so, thank you for your prayers.
We visited the substation and shared ideas about what to do with the 25 year old equipment that was severely vandalized.  We all agreed to scrap it and start over with a simplified system that would be easy to operate and maintain.
We put a plan on paper and agreed on who would be responsible for what, and then committed the entire project to the Lord in prayer.  Then we went our separate ways.
It will require a considerable amount of fund raising on the part of Camp Hill United Methodist Church.  However, when knowing it's the right thing to do, and seeing God's hand in the process to this point, I have complete confidence that it will come to pass in God's time.
The only time you can get a shipping container to this location is during the dry season so the long range plan is to return in January of 2012. 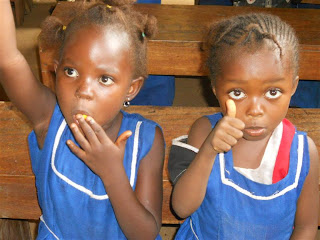 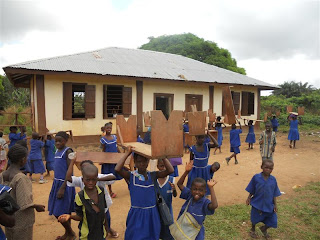 Today we visited the primary school. Candy and kids make a great picture for sure.
I met a man and his name is Bob.  He is artist.  Bob has made four beautiful paintings that are inside the church building.  It takes him about 3-4 hours to paint each one.  What a talent!  He is a great guy who loves the Lord. 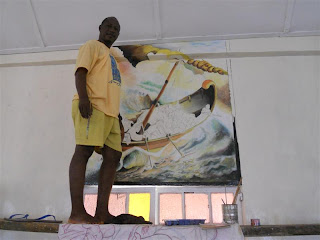 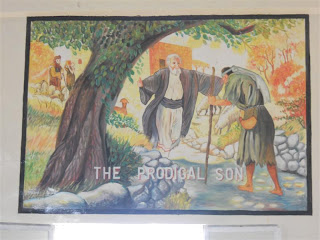 Things are really getting lively around here as the preparation for the Sunday church dedication is well under way.  I'm sure we will have lots of pictures by next Monday.  Stay tuned....   Tom & Linda Garber
Posted by Survey trip to Beirut & Sierra Leone at 1:01 PM No comments:

A Day to Remember! The heat of the day and the constant activity and tugging begins to take its toll by the end of the day.  All that it takes is one more story about what happened here during the war and you forget about being tugged on. You just keep holding out your hands and arms and let these little kid's just hang on since that is what they need right now. I sat down for a moment to try to write down a few electrical measurements and was surrounded by children and the following picture tells the story. 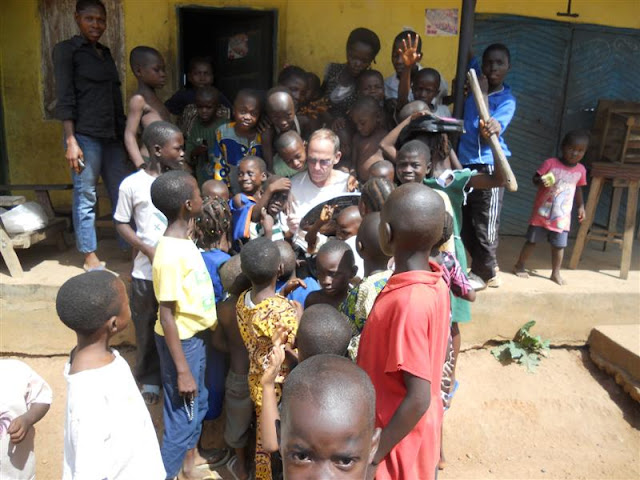 Linda was able to assist in the first children's feeding day at the Methodist school.  I missed the event, but witnessed the results on the road to town.  LOT's of happy children who had the opportunity to eat a small meal of rice, chicken and fish.  Most of them seldom have the chance to eat any meat so it was a real treat. 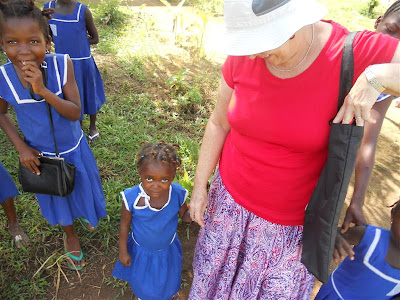 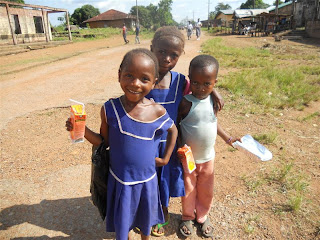 Tomorrow I will have a very important meeting with a government power company representative. He will be a “major say” as to what the power company will or will not do.  He also will be the one to give us permission to do what we propose to do which would provide power to this town for the first time in 17 years.  Please Pray!! 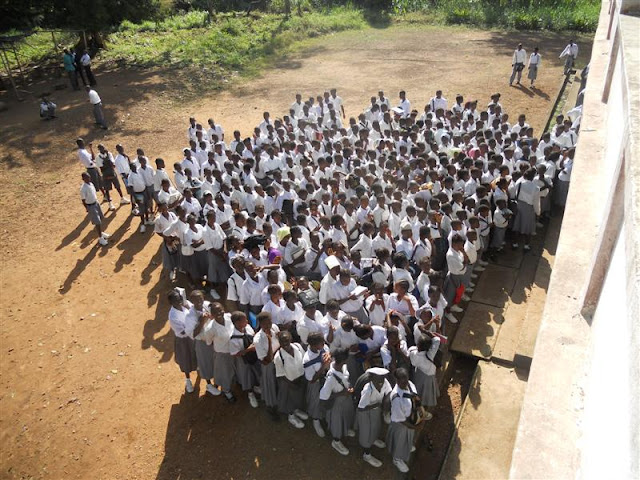 Also, my leg is doing better but I’m not out of the woods yet.  Thank you for your continued prayer.
Serving Together,
Tom and Linda
Posted by Survey trip to Beirut & Sierra Leone at 12:40 PM No comments:

Now in the city of Panguma! Sierra Leone, Africa 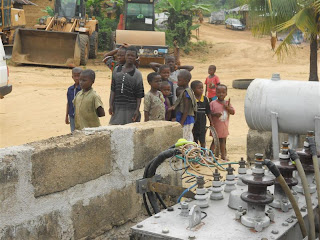 We arrived in Panguma late on Monday night, November 15th.  The first thing we encountered - no lights in the guest.  We had to immediately jump into the problem solving mode.  I had to rewire the end of an extension cord that was supposed to back feed the house through a receptacle, (I can't believe I did that, but there is no connection to anything so back feeding is not an issue and their plugs are much larger then ours.)
No water either, but we could work on that tomorrow. It just really felt good to get off those bench seats in the back of the Land Cruiser after another 10 hour trip.  Six of us crowded in the back seats with Linda in the passengers seat.  Even with all the hand bags and groceries, including a 50lb bag of rice, we felt somewhat better every time we passed one of the local vans that usually had 20+ inside and sometimes another 6 or 8 on the roof.  It really depended how many goats were on the roof first. 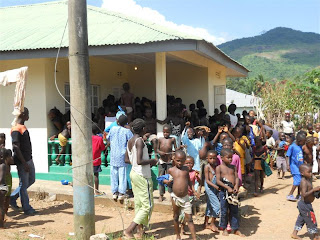 The three men from Camp Hill United Methodist Church started handing out clothes this afternoon.  They had brought three large suitcases of clothing with them. The village and our guest house immediately turned into mayhem as every mother wanted her child to get the free clothes, which for many of these dear folks it would be the first clothes they have ever owned.  We had to lock the doors and allow only one child in at a time in order to maintain any control.

One medical prayer request -- I had a small (1/2 in) cut while in Lebanon and it was scabbed over good and I thought, no problem. I guess something got under it here in Sierra Leone and my leg from my knee down to my ankle is now red and swollen.  I only have Ciprofloxacin.  I took the first dose today.  I put a fresh bandage on it with antiseptic cream.  Those of you in the medical field who would like to share some medical advice I would be most appreciative.  There is a small hospital here, but I hesitate to go there for many reasons.
Now, allow me to warn you, that the rest of this letter will be technical stuff, so if you ladies want to sign off until tomorrow I completely understand.
I just finished an initial drive-through on the electrical system that used to be operational until the war started 17 years ago.  Both of the village transformers had been stolen and all the wires on the 1/2 mile line are gone as well. 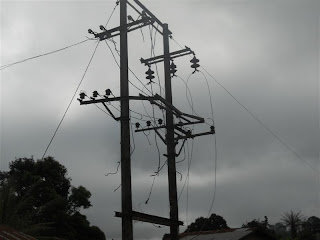 The step-down transformer from 33kv to 11kv is still mostly intact. I am not sure if it is useful as I can not see any oil level.  I suspect it was drained and used for motor oil or something else of equal compatibility.  I'll dig deeper into it later this week.
The electrical substation, or power house, was built by the Chinese before the war so it is basically junk. I will begin praying now for help and for some design engineering on a simple 33kv to 11kv system. 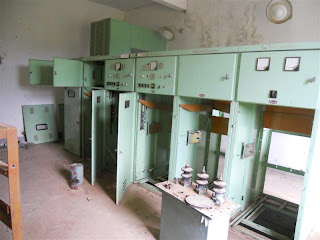 All the concrete poles and anchors and most of the insulators are still intact. I will count and do measurements tomorrow for total line length needed.  I expect it will be about 1/2 mile.
This total 33kv system is fed from two power plants.  One source is a diesel system at 5 Megawatts and the other source, is a hydro system at 6 Megawatts. I visited both and have lots of pictures. "Interesting”…
That’s enough for now.  Please keep praying.  The needs are great and the workers few.
Serving Together,
Tom and Linda
Posted by Survey trip to Beirut & Sierra Leone at 1:50 PM No comments:

Today, I received a cell phone call from Tom & Linda Garber.  Tom reported he had the opportunity to meet with the power company officials in Bo, Sierra Leone.  It was a very good and profitable meeting.  Tom called me while in transit by vehicle to Panguma, Sierra Leone.  When they arrive in Panguma, Tom will meet with the power company officials in this city to determine I-TEC’s role and possible involvement.  Tom said that the power from both the city of Bo and city of Panguma are tied together.  In Bo, they generate their power by diesel and in Panguma their power is generated by Hydro.  Tom asked that we pray for God’s wisdom and discernment to determine how best to assist with their electrical needs.  Cell phone and internet are both very limited in Panguma, so it may be a while before another update is posted.  Tom & Linda send their greeting to everyone.  They are extremely thankful for your prayers.
Praying Together,
Paul Kinley (for the I-TEC team)
Posted by Survey trip to Beirut & Sierra Leone at 10:22 AM No comments: 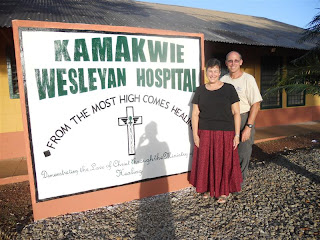 Hello Everyone!
This may be the last blog update for awhile.  We want to thank all of you for praying for us and keeping us before the Lord.  We leave tomorrow for Freetown, Sierra Leone, and then meet up with another team and travel East to the town of Panguma.  The closest power is about 12 miles away.  I don't know if they have any email, so please keep praying as we do our final survey.
Today was our final day at Kamakwie Hospital and we praise the Lord for all He allowed us to accomplish.  For example, He enabled us to get the 50kw generator running and to adjust the hertz on both generators from 41hz to 50hz.  By doing this it also improved the voltage from 180 to 225 – everyone is happy.
And as a bonus, the Lord led us to find a fault in one of the lines that provides power to about 8 national staff homes.  They have been without power for nearly 3 weeks.  By correcting this problem – everyone is happy.
Lord willing, this will be a great opportunity in the future for I-TEC to install a large solar system and completely rewire the hospital.  Please keep an eye on our website to follow the progress and plans for the future. 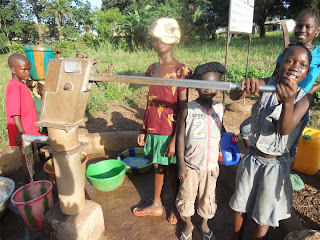 Serving Together,
Tom and Linda
Posted by Survey trip to Beirut & Sierra Leone at 10:56 AM No comments: